V.F.3 The Volitional Submission of the Sacrifice

Article 3 –  The Volitional Submission of the Sacrifice

a.   Covenant of Sacrifice; God’s Sacrifice Performed in the Man

b.  The Type in Isaac

c.  The Divine Strength Unto the Sacrifice

Article 3 –  The Volitional Submission of the Sacrifice

a.   Covenant of Sacrifice; God’s Sacrifice Performed in the Man

Before going to His cross Jesus made allusion to it for the Jews.  After giving them a parable concerning His shepherd-hood of God’s sheep, He said:

The Lord describes His sacrifice in such a way as to suggest a “covenant” between Himself and His Father for the redemption of all things; the cross as the sealing of His performance; the resurrection as the sealing of the Father’s performance.  Thus the cross constituted the performance of a covenant performed on both sides of the equation by God.  It was not only God that raised Jesus from the dead through the transacting agency of His Holy Spirit,[1] but it was God that appeared in flesh for the work of the sacrifice itself.  Thus the work of God in redemption was performed by God alone.

When the Lord says concerning His life “I have power to lay it down”, the better rendering is “authority” rather than “power” (as rendered in the NASV). The Greek word is not dunamis (meaning “power”) but ex-oo-see’-ah [2] (meaning the authority or capacity to act rather than the strength to act.  The first usage of this word is:

Mat 7:29  For He taught them as one having authority, & not as the scribes.

The second occurrence of the word is when the centurion described his own authority:

Mat 8:9  For I am a man under authority, having soldiers under me.

This word is also used when the Jews demanded that Jesus state His authority.

Mat 21:23  By what authority doest thou these things? & who gave thee this authority?

In telling the Jews that the sacrifice of His life would be performed pursuant His power to lay it down and to pick it up again, the precise meaning is that He had been given the sanction and authorization of His Father to transact salvation through the conduct of His life and His death.  That His power may be presumed is evident in the Lord’s rebuke of Peter when he tried to defend Him with a sword, in which the Lord said to Peter:

Peter should have understood Christ’s power and that He was not in need of earthly means of defense. Rather, the critical point in the Lord laying down His life is not just that He had the power to lay it down or not to lay it down, but that the laying down of His life in sacrifice had the sanction and the will of the Father behind it.  The issue was sanction rather than strength.

b.  The Type in Isaac

Consider the account of the sacrifice of Abraham’s son, Isaac.  God directed Abraham to walk out the steps that God Himself would perform in the submission of His own Son to crucifixion.  God tested Abraham in terms of his obedience to His voice; and in submitting to all the steps toward the sacrifice of his own beloved son, his submission became symbolic of God’s salvation for all those covenanted with God through faith.  Faith allowed Abraham to perform the unthinkable . . .

Only those that believe God’s testimony are able to hear and to respond to His call; a call which itself leads to the place of sacrifice.  Through Abraham’s belief that God could even raise his son again from the dead, and his walking-out of that faith, God made the following declaration:

. . . By Myself I have sworn . . . because thou hast done this thing, and hast not withheld thy son, thine only son; That in blessing, I will bless thee, and in mulitiplying, I will multiply thy seed as the stars of heaven, and as the sand which is upon the sea shore; and thy seed shall possess the gate of his enemies; and in thy seed shall all the nations of the earth be blessed; because thou hast obeyed My voice.           Gen. 22:16-18

God supplied His own means for redemption signified by the ram caught in the thicket:

An irony is posed in this animal being caught by its own power.  Sometimes two dueling bucks will become entangled in one another’s antlers and thereby rendered helpless.  The picture of a strong ram becoming ensnared by that same vehicle which gave him his might and his power in battle poses a great symbol.  Therefore we must consider; If the ram in the thicket is an allusion to Christ, what is the significance in the manner in which the ram was provided? 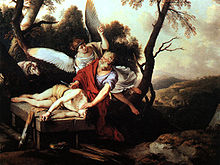 The strength of Christ was His likeness to the Father, ie. the holiness of His nature.  The nature of God demonstrated in Christ consisted of His gentleness, His compassion, His meekness, and such qualities that would have rendered Him – in the natural – prone to insult and to attack but for the Divine preservation.  Therefore the Lord could tell those repeating death threats from Herod:

There was nothing Herod or any agency of men or angels could do against the life of Christ until His purposes were fulfilled.  The Father preserved His life until such time that the sacrifice was to be offered.

c.  The Divine Strength Unto the Sacrifice

Habakkuk had a vision of Christ wherein he declared; “He had horns coming out of his hand”.[4]  The power of God was made manifest in His forbearance.  Although he could have called “twelve legions of angels”, He rather submitted to death on the cross for the sake of salvation.  In His gentleness, He was nonetheless kept from physical attack and death by the divine agency until the proper time.  Therefore the prophecy – quoted to Him in the midst of His being tempted by Satan – was:

Meek and lowly in the world, Christ nonetheless possessed all the power of the Infinite.  Possessed within the Father, He stood wholly preserved. This same Spirit of holiness constitutes the salvation of Zion.  This is the strength of Christ; a strength that is like no other as all other is merely that of created things.  But the strength of Christ is that of the Creator Himself.  The strength of Christ was demonstrated in His submission that allowed His Father to take an eternal vengeance upon the hand of His oppressors and upon the true source of all wickedness.  Thus conformity to the image of Christ and attainment in His holy nature that is symbolized in the Feast of Tabernacles stands corollary to the witness that such attainment in Christ shall entail.  For remember the Lord’s parable concerning the seed that comes to full maturity:

But when the fruit is brought forth, immediately he putteth in the sickle, because the harvest is come.     Mark 4:29

At the proper time, darkness was allowed to overtake the Son of God.  Likewise, at the proper time, darkness will be allowed to come against the sanctified as it did against their sanctifier.  There shall come a time of submission during which those that would do harm to the body of Christ are given power to act at the time, place, and circumstance ordained of God for such purpose.  This shall be a herald unto the sacrifice of Jesus Christ and the testimony of His earthly witness.  The witness of blood shall be manifested within the body of Christ and be delivered to the world as a testimony of God.  At that time, those sanctified in Christ shall say:

I was converted to the faith of Jesus Christ in 1982 at which time I received water baptism and Spirit baptism. In the Spring of 2008 I was led of the Spirit through a process of repentance upon which I had an encounter with Christ that worked a profound change upon my inner being. I became aware that I had been forgiven a great debt of sin. I soon felt the Lord's direction that I close my office that my energies not be divided from the study of doctrine.
View all posts by Lamp-Stand →
This entry was posted in 5F. TABERNACLES / WITNESS OF BLOOD COROLLARY (Associational Aspects) and tagged Feast of Tabernacles, holy sacrifice, sacrifice of abraham, sacrifice of isaac, submission to God's purposes, volitional sacrifice, witness of blood. Bookmark the permalink.