I.C.4 Pentecostal Sanctification at the Fulcrum

Part I – THE LAMP-STAND MODEL

Article 4 – Pentecostal Sanctification at the Fulcrum

a.  Joel’s Prophetic Sequencing of Pentecost as Consistent with the Lamp-Stand Model

b.  The Lamp-Stand’s Mid-Level Intersection as Depicting Pentecostal Sanctification

Article 4 – PENTECOSTAL SANCTIFICATION AT THE FULCRUM

a.  Joel’s Prophetic Sequencing of Pentecost as Consistent with the Lamp-Stand Model

Joel is the prophet most associated with the redemptive principle of Pentecost given the quotation from chapter two of his prophecy by the apostle Peter on the day of Pentecost.  While Peter’s quotation certainly establishes for us that Joel 2:28-32 is speaking of Pentecost, we might miss that the broader prophecy of Joel itself speaks to Pentecost in terms of its context in God’s work.[1]  The prophecy of Joel situates the Holy Spirit’s outpouring as occurring subsequent to a particular event.

And it shall come to pass afterward, that I will pour out My Spirit upon all flesh.   Joel 2:28 (KJV)

“Afterward” is used in reference to the land having been restored of its vitality through repentance.  The land spoken of is Israel as a metaphor for the body of Christ.  Therefore Joel provides a prophetic sequencing of Pentecost depicting the feast as coming subsequent to the body of Christ entering upon repentance through the agency of the Holy Ghost.

But this scenario might appear logically backward.  If Pentecost constitutes the initial reception of the Holy Ghost forming the body of Christ, then how is it logical that there exists a body of Christ to repent if said body has yet to have been created through the Spirit’s outpouring?  But the prophecy of Joel is clear that the outpouring of the Holy Spirit occurs subsequent to the repentance of the Church. 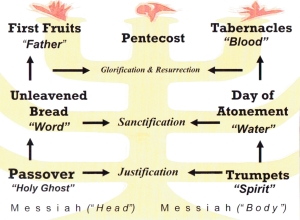 This view of Pentecost in which the principle is broadened so as to incorporate all aspects of the Holy Spirit’s work, from justification, through sanctification, and on to resurrection is clearly depicted in the Lamp-Stand model by means of the three successive tiers intersecting along the central shaft referred to in this treatise as the fulcrum; as the agency of God in forming the Church into the image of Christ through means of the cross.  This agency is the Holy Spirit.

The fulcrum-model of Pentecost brings Pentecost into harmony with the sequencing of Joel’s prophecy which points to a repentance occurring within the body of Christ prior to the outpouring of God’s Spirit.  That prophecy commences from a standpoint of ruination in the land expressed in the first chapter’s metaphorical language as; drunkenness (v.5), the rising up of an enemy against the land (v.6), the drying up of the yearly crops of wine, wheat, barley, and the fruits of the land (v.7-12), a distressed condition of the herds (v.18), fire that has consumed the trees (v.19), and a distressed condition of the wild beasts (v.20).  These stand metaphor for the ruined spiritual estate of the body of Christ caused by the influences upon it of the unbelieving world.  What is the answer for this abject condition of the church?  Repentance!  With repentance God is able to render judgment in favor of the body of Christ leading to the bringing forth of fruit (v.22), the pouring forth of the early and latter rains (v.23), the abundance of grain to eat (v.24-26), and the realization that the Lord; “is in the midst of Israel” (v.27).  Therefore, Pentecost is the pouring forth of God’s Spirit upon all flesh that we find expressed in the final verses of Joel chapter two. This is made efficacious via a work of preparation in the body of Christ which itself receives the outpouring from God.

b.  The Mid-Level Intersection of the Lamp-Stand as Depicting Pentecostal Sanctification

Therefore despite the fact that one has received Pentecost in terms of the baptism of the Holy Ghost this would not exclude further experiences (ie. events) of the Pentecostal outpouring of God’s Spirit.  Indeed, we find that the Lamp-Stand’s fulcrum (representative of Pentecost) has yet a higher point of intersecting branches; a second intersection between the witnesses of heaven and earth which depict the operation of sanctification.

If the model is correct, there is no inconsistency in God’s promise that He will pour out His Spirit upon the Church and the Church already having formerly received its Pentecost.  For if we will “hear His voice” and “harden not our hearts”, we can then become proper vessels for the life and work of His Spirit all over again!  This is reflected in the proverb:

And this must happen first in the house of God before it can be realized for those outside of Christ that have as yet to know the things of God.

Had those to whom Peter wrote received the baptism of the Holy Ghost?  They certainly had; and having the baptism they contemplated a judgment that would come upon them and for which they must prepare.  The true and faithful testimony of the Church is that testimony given by John the Baptist.  He was not ambiguous when it came to expressing what would be the effect of the coming of Jesus Christ in His work as baptizer in the Holy Ghost:

“As for me, I baptize you with water; but One is coming who is mightier than I, and I am not fit to untie the thong of His sandals; He will baptize you with the Holy Spirit and fire.  & His winnowing fork is in His hand to thoroughly clear His threshing floor, & to gather the wheat into His barn; but He will burn up the chaff with unquenchable fire.”               Luke 3:16-17

The story of Ruth provides a type for this glorious cycle of the coming of God’s people unto Himself for justification and thence again for sanctification.   We read that . . .

While it is said of Naomi, that she “returned”, the same cannot be said concerning Ruth.  Ruth was not returning from a sojourn away from Israel.  Rather she was a newcomer to the faith of Abraham.  While Naomi represents the return of the remnant, Ruth represents those hearing and believing for the first time.  For Ruth, the bread received in Bethlehem was evangelistically justifying.  The apostle Paul writes:

Remember that you were at that time separate from Christ, excluded from the commonwealth of Israel, & strangers to the covenant of promise, having no hope & without God in the world.                Eph. 2:12

The Ephesian believers received Pentecost as their induction into the commonwealth of Israel that is the body of Christ. – an orientation for which Ruth stands metaphor.  She is from the land of Moab, an outsider to the commonwealth of Israel.  She stood – as Paul says – “without God in the world”.  However, this changes when she comes to Bethlehem during barley harvest.  Paul continues:

For He Himself is our peace, who made both groups into one,  & broke down the barrier of the dividing wall, by abolishing in His flesh the enmity, which is the Law of commandments contained in the ordinances, that in Himself He might make the two into one new man, thus establishing peace..         Eph. 2:14-15

Together they represent the “commonwealth of Israel”, a mixture of the stranger with the estranged; the believing with the repentant.  These are grafted together into the olive tree and made one body. 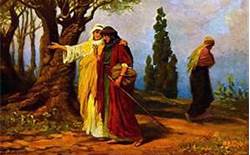 Ruth represents the next generation of believer in Christ, about to receive the seal of the Spirit.  For Naomi, this is a very real, soul-changing work wherein Christ’s sacrifice for sin breaks the yoke of the law and the law’s power to separate us from God.  Naomi has received the release of her conscience from sin and death.  Prior to this she would only allow herself to be called “Mara”, meaning “bitter”.  Recall that she lost her husband and her two sons while sojourning in the country of Moab:

But Naomi finds her consolation to be great in the new work of God symbolized in the wheat harvest.

Naomi had profound knowledge of the power of Christ to justify both her and Ruth with her!  Ruth could then believe and profess this faith, and receive, and that, apart from any worthiness of her own.  Ruth is now receiving the promises; promises coming into effectuation for Naomi.  Ruth had been an alien to the promises of Christ; but in following a grieved Naomi back to her homeland, she found her own life to be Christ.  They both found salvation.  Ruth entered upon faith in the blood of Jesus Christ to justify; Naomi entered upon the effectuation of the blood to justify by that same faith.

Therefore, once Israel has heard the voice of God, returned to Him at His reproof, and has experienced anew the work of the Holy Spirit performed at the foot of the cross, only then, at this time, even “today” God says; “I will pour out My Spirit”.  And when Pentecost revives the church in sanctification, the groundwork is laid for Pentecost to be extended as a principle accommodating even the nations who have remained in the dark concerning God’s work.  Thus Pentecost occupies not only the principle of the Spirit’s baptism, but the restoration unto God of those once baptized into Christ at the place of the cross.[3]

[1] See a article II.H.1 Contextual Study of Joel’s Army which studies Joel’s prophecy contextually to itself.  This provides an overview of Joe’s prophecy that is helpful in ascertaining the meaning and placement of Pentecost in terms of sanctification.

[2] Not the least of which being the longstanding nineteenth-century controversy pitting evangelicalism against Wesleyan Methodism or the longstanding divide between Second-Work and Finished Work Pentecostals.  See previous articles for treatment of those topics.

[3] See this treatise Part II, Subpart C, Article 1; Fulcrum Identified as the Cross of Jesus Christ for more in depth treatment of this principle.

I was converted to the faith of Jesus Christ in 1982 at which time I received water baptism and Spirit baptism. In the Spring of 2008 I was led of the Spirit through a process of repentance upon which I had an encounter with Christ that worked a profound change upon my inner being. I became aware that I had been forgiven a great debt of sin. I soon felt the Lord's direction that I close my office that my energies not be divided from the study of doctrine.
View all posts by Lamp-Stand →
This entry was posted in 1C. THE FULCRUM - (Lamp-Stand Model) and tagged barley harvest, context of pentecost, Joel's prophecy, pentecost and sanctification, Pentecostal sanctification, Ruth and Naomi, type in ruth. Bookmark the permalink.